The First Execution in the Gas Chamber

On February 8, 1924, the first execution by gas took place at the Nevada State Prison in Carson City as Gee Jon, a Chinese immigrant convicted of murder, was put to death – but things did not go as planned. 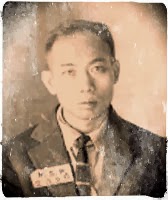 Gee Jon was born of Cantonese descent in China in 1895 and immigrated to the United States between 1907 and 1908 and spent most of his life in San Francisco’s Chinatown. As a young man, he became a member of the Hip Sing Tong, a criminal gang that dealt in narcotics and liquor. In 1922, territorial disputes with the Bing Kong Tong led to a bloody and brutal war between the tongs (Chinese gangs), spreading out across California and Nevada.

Tom Quong Kee, 74, was a laundry proprietor and a member of the Bing Kong Tong in Mina, Nevada. Hughie Sing, his American-educated apprentice of two years, set Kee up to be murdered by Gee Jon. On the night of August 27, 1921, Gee Jon knocked on the door of Kee’s residence. When the old man answered in his pajamas, Jon shot him with a .38-caliber Colt revolver. Unlike most tong murders, Jon and Sing were arrested and thanks to the anti-immigrant frenzy in the United States at that time, quickly arraigned and charged with murder.

Jon and Sing were defended by attorneys James M. Frame and Fiore Raffetto, but there was little defense to offer. After a quick trial, both were convicted and sentenced to death. Later, Sing's sentence was commuted to life imprisonment because he was only nineteen years old and Jon had committed the shooting itself. As luck would have it – bad luck as it turned out – a bill authorizing the use of lethal gas had passed the Nevada State Legislature in 1921, making Gee Jon the first person eligible to be executed by this method. Attorney James Frame argued that his sentence constituted cruel and unusual punishment, but his appeal was denied. The Supreme Court of Nevada instead complimented the state legislators for "inflicting the death penalty in the most humane manner known to modern science."

Problems with the planned execution began at once. The California Cyanide Company of Los Angeles was the only distributor of liquid cyanide in the western United States and refused to deliver it to Carson City because of liability concerns. The poison was used to eradicate pests from citrus groves in California, they said, it wasn’t meant to be used on people. But Warden Denver S. Dickerson had a way around the problem. He sent his assistant, Tom Pickett, to Los Angeles to personally pick up twenty pounds of the lethal gas, which was contained in a mobile fumigating unit that cost $700.

More problems occurred when it came time to carry out the execution. Four guards who did not want to participate in the process abruptly resigned. Then, officials first attempted to pump poison gas directly into Gee Jon’s cell while he was sleeping, but without success because the gas leaked from the cell – endangering everyone else in the prison.

It was realized that an actual “gas chamber” was needed, so a makeshift room was set up in the prison’s butcher shop. At least one cat was used to test the lethal effectiveness of the chamber to make sure that it worked correctly. It did. So, plans were made for Gee Jon to be strapped to a chair in the chamber, which was eleven feet long, ten feet wide and eight feet high.

On February 8, Gee Jon was placed in the chamber and tied to the chair.  A small window next to the wooden chair allowed witnesses to look inside. The attendees to the execution included news reporters, public health officials, and representatives of the U.S. Army. Gee Jon wept as he was placed on the chair until the captain of the guards told him to "Brace up!" 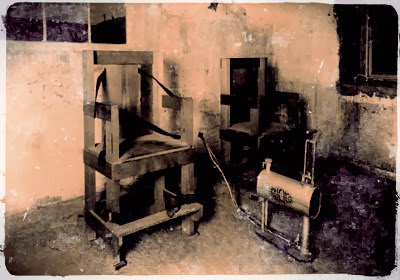 The makeshift gas chamber at the Nevada State Prison. Note the insect fumigator used to spray the gas, aimed at the chair when the inmate was strapped.

At 9:40 a.m., the fumigating pump sprayed four pounds of hydrocyanic acid into the chamber. The weather was cold and humid outside and because an electric heater had failed, the temperature in the chamber was only 52 degrees, not the ideal 75 degrees, causing some of the acid to form a puddle on the floor.

Gee Jon appeared to lose consciousness in about five seconds, with his head continuing to nod up and down for the next six minutes. He was completely motionless after ten minutes. Some of the witnesses momentarily thought they smelled the odor of almond blossoms, a telltale sign of cyanide, leaking from the chamber. As panic ensued, the warden cleared the area and opened a vent so that the poison gas could be pulled out the witness room and the makeshift chamber. Regardless, prison staff members refused to enter the room until the puddle of acid on the floor had evaporated. It would be another three hours before Gee Jon’s body was removed from the chamber and taken to the prison hospital. A group of seven doctors declared him dead, but did not conduct an autopsy on the body for fear that remaining gas in his body might be released.

After the execution, the Nevada State Journal proclaimed, "Nevada's novel death law is upheld by the highest court — humanity." However, the San Jose Mercury News printed, "One hundred years from now Nevada will be referred to as a heathen commonwealth controlled by savages with only the outward symbols of civilization."

The editor of the newspaper in San Jose was not the only one unhappy with how things had gone with the first ever execution by gas. Warden Dickerson reported to Nevada governor James G. Scrugham and the state legislature that he believed the use of lethal gas was impractical. He believed that a firing squad was still the best method of execution.

But the gas chamber soon came into regular use (30 more times in Nevada) after methods were improved and safety issues addressed. The gas chamber continued to be used for executions for decades to come, only being largely replaced by lethal injection in the late twentieth century. It still remains a back-up option in Arizona.