THE RISE AND FALL OF PULLMAN

In the years after the Great Fire, wealth and prosperity returned to Chicago. According to many reformers and activists, that wealth remained in the hands of a privileged few. Men like Cyrus McCormick, George Pullman, and others were the city’s wealthy elite. They worked their employees hard and paid them poorly, but were oblivious to the treatment of their workers.

America’s “titans of industry” during the so-called Gilded Age were puzzled when their employees were not grateful for what they were given and was enraged when they dared to ask, and organize, for more. All of the major employers saw constant unrest among their workers over job conditions, wages and shorter workdays. There was no question that conditions in many plants were poor and men worked 10-12 hours, six days a week, for very little pay. Strikes and protests soon became commonplace.

During the tense summer of 1877, when there were riots in the Chicago that were part of a nationwide strike effort by railroad workers protesting wage cuts, Marshall Field volunteered the use of his delivery wagons to transport policemen from one problem area to another. Three men were killed and eight wounded during a demonstration at a Burlington Railroad roundhouse and the next day, 10 more strike sympathizers were killed at the Halsted Street viaduct. Federal troops who came directly from fighting Indians out west were sent in to restore order. The following year, Field, McCormick, and others secretly subscribed to a fund that would furnish Gatling guns and uniforms for the Illinois National Guard. This was done, according to McCormick's assistant, to prepare for "what danger if any was to be anticipated from the communistic element in the city."

Strikes and protests continued but the Haymarket Square Riot in 1886, which ended with a bombing and led to the deaths of police officers and protesting strikers, changed the face of the labor movement forever. 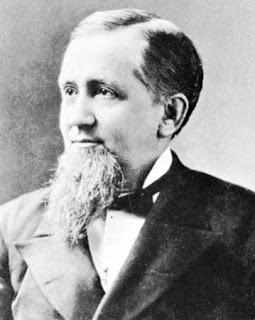 George M. Pullman never dreamed that anything like the Haymarket Square Riot would affect his company. Pullman was a self-described "humanitarian," who built a model company town for his employees, and never imagined that his workers could want for anything. He was born in New York and came to Chicago in 1855. As a cabinetmaker and construction engineer, he supervised the raising of many of Chicago's buildings and later developed the first railway sleeping car that was suitable for long distance travel. He also developed the dining car and parlor car through the Pullman Palace Car Company, which was organized in 1867. In 1880, he built a factory on the south side of Chicago and during the heyday of his company, created the model town of Pullman around it.

The small town was located 10 miles outside the city proper, next to the factory. It consisted of 1,800 brick homes, an arcade with a theater, a library, a hotel, stores, a bank, two churches and a school. However, there were no beer gardens or saloons and alcohol was strictly forbidden. The only bar in town was located in the Florence Hotel and was reserved for Pullman and his guests.
Rules in the company town were harsh. Any employee who dropped paper in the street and did not pick it up could be fired. Any tenant could be evicted from his home for any reason, with a 10-day notice. No labor organizers were permitted within the town. No improper books or plays were allowed at the library. In addition, rent was higher than in comparable homes in the city and all gas and water was purchased from the company, who made a profit on it. On payday, all debts owed to the company were automatically deducted from what the employee earned. This debt included rent, water, gas or food from the company store. Some families literally ended up with only few cents left after all of their deductions.

The “perfect” factory town of Pullman

In 1893, Chicago was host to the World's Columbian Exposition and while the fairgrounds may have been dubbed the "White City," the actual city was plunged that year into what has been called the "black winter." One of the nation's recurrent financial panics and depressions struck and in Chicago, people were going hungry and dying from the harsh weather. Soup kitchens were organized and City Hall was used to shelter as many as 2,000 people each night. The saloonkeepers were even doing their part to help, feeding as many as 60,000 jobless men each day. They did so at their own expense since most of the men were unable to afford even the nickel beer that was customary to earn the free lunch.

During this recession, Pullman laid off about one-third of the workforce and wages for those remaining on the job were cut by as much as 40 percent. Many men received nothing, or even went into debt on payday. That winter, some men went so hungry that they fainted on the factory floor. Finally, a delegation of workers went to see George Pullman about the disgraceful conditions. He refused to meet with them and in fact, fired all of them and evicted them from their homes.

An Indiana man named Eugene Debs later became the most successful Socialist candidate for president in American history. Debs organized a group of workers who demanded restoration of their wages from the Pullman Company. Needless to say, the demand was refused. On May 11, 1894, the workers went on strike and Pullman was shut down. Soon, members of the American Railway Union began a sympathy strike, which led to violence across the country. President Grover Cleveland intervened and ordered the strike to end, stating that the railway demonstrations interfered with delivery of the mail. Eugene Debs refused to bow to pressure and he was jailed.

By the middle of May, Pullman families were begging for food. Chicago's mayor sent thousands of dollars in groceries to the company town, spending money from his own pocket. Chicago city leaders and politicians from around the country urged Pullman to settle the strike, but he refused. The union sent him a letter that asked him to meet with the workers, but he would not even open it.

The union then voted to boycott all Pullman cars on the rail lines and refused to handle them. The United States Attorney General, Richard Olney, saw this as a way to end the strike. Thanks to the previous court ruling, the union could not interfere with the delivery of the mail, but the ruling said nothing about other trains. They could refuse to work on any train that was not carrying mail. Soon, the railroads began attaching unnecessary Pullman cars to other trains so that union members would not handle them. In this way, the companies forced the members to break the law by refusing to allow the mail to go through. 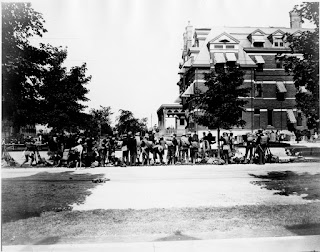 Militia units formed at Pullman to quell unrest among the striking workers.

With that accomplished, President Cleveland sent soldiers into Chicago on July 2. It was an act that marked the first time that federal troops had been used to intervene in a labor issue and it was done against the express wishes of Illinois governor John Altgeld, who believed the state could handle the issue. Regardless, it was something that was a long time coming. Following a strike at the McCormick factory in 1885, Marshall Field had proposed establishing a military base near the city so that federal troops would be nearby in case of problems. Business leaders had previously been using Pinkerton agents to break strikes but using the military instead appealed to all of them. With a donation of land on the north shore of Lake Michigan, Fort Highwood (later re-named Fort Sheridan by General Sheridan himself) was established in 1887. 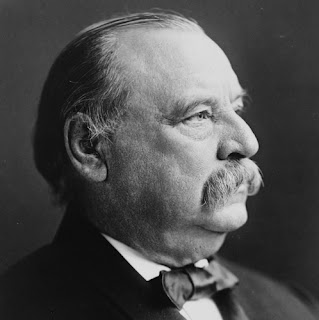 President Grover Cleveland sent Federal troops to Chicago to interfere in the strike, against the wishes of Illinois Governor John Altgeld.

In July 1894, troops from the fort were sent into the south side of the city to control the strikers, who, up until that point, had been peaceful. Angry that troops had been sent in, the workers began to riot. On July 5, seven buildings were burned and the following day, a mob of 6,000 set 700 railway cars on fire. On July 7, another mob attacked a military command post, located at a railroad bridge at 49th and Loomis. The soldiers fired into the crowd, killing four men and wounding another 20. Several soldiers were also killed, including some cavalrymen.

On July 8, more federal troops were sent in to control the violence and the mobs were again ordered to disperse. After more violence, including more railroad cars being overturned and set on fire, the riots finally came to an end. It was estimated that more than $685,000 in damage occurred during the riots and the death toll included 34 members of the American Railway Union.

In the end, the strikes and riots had little effect on the situation at the Pullman plant. The strikers went back to work and the plant re-opened in August. There were scores of new workers on the payroll and each of them had to sign a pledge that they would not join the Union. All of the Union workers who were hired back had to surrender their Union cards. However, many of the men were not hired back.

This prompted Illinois Governor Altgeld, who had fought against federal interference in the strike, to go to Pullman and personally ask that the men be hired back. He arrived in the company town and was taken on a tour by the Pullman Company vice-president. Pullman himself was too busy to entertain him. The idea was to show the governor what a wonderful place the town was. Instead, Altgeld found more than 6,000 people with no food, families living in poverty and women and children in unsuitable living conditions. He was appalled by the place and realized that Pullman was simply oblivious to the lives of his employees. Altgeld returned to Springfield and quickly dispatched a letter. He asked that Pullman hire back all of the replaced workers and in addition, cancel all rents from October 1 so that the workers could get back on their feet. Pullman refused to accept the letter until he was literally forced to take it by an Illinois National Guard officer. Then, of course, he did nothing.

In 1898, the Illinois Supreme Court ordered the company to sell off its housing stock in the town of Pullman, bringing an end to this twisted element of Chicago history.

As for Pullman, his victory in breaking the strike was short-lived. He succeeded in losing the love of his daughters, losing the respect of his workers, and earning the disdain of most of the national press. He died three years later in 1897 and was buried in Graceland Cemetery. His grave was fortified with railroad ties and reinforced concrete so that "radicals, anarchists and embittered workers" would not be able to violate his crypt.

The factory town of Pullman, as well as the Pullman Palace Car Company, was a fading memory for many years, occupied by residents who knew little or nothing about this infamous time from the city's distant past. But recently, the “perfect factory town” was named as a National Historic site and renovations have been started to preserve this piece of Chicago history for the future. One has to wonder what lessons will be learned by future generations from Pullman’s less-than-auspicious past…

Posted by Unknown at 9:33 AM No comments: