The Rise and Fall of 2122 North Clark Street

Chicago, in its own way, memorialized the warehouse on Clark Street where the massacre took place. It became a tourist attraction and the newspapers even printed the photos of the corpses upside-down so that readers would not have to turn their papers around to identify the bodies. 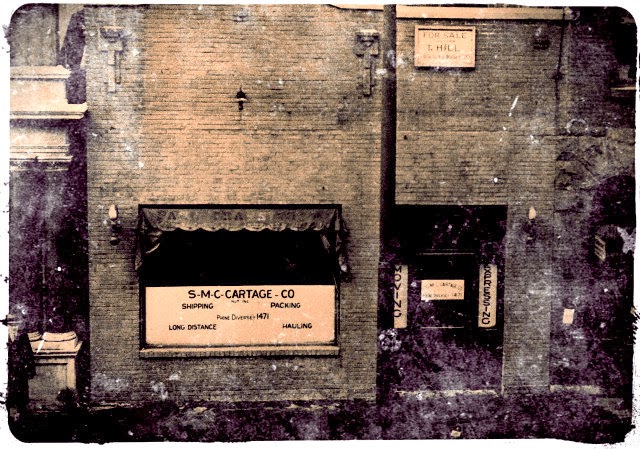 The S-M-C Cartage Co. at the time of the massacre and (right) the boarded up building in  summer 1929, after the site had received so much negative publicity in the papers.

Right after the massacre, the SMC Cartage Company was temporarily boarded up. The building had been leased by Moran gang associate Adam Heyer but was owned by Frank C. Brusky, who moved his own trucking firm (Brusky Overland Movers) into the space in 1930. When he did, he renovated the building, installed two more windows and added space for storage on the second floor.

During the renovations, Brusky discovered a trap door in the corrugated ceiling of the garage, directly above the spot where the Moran gangsters were killed. The door led to a concrete chamber nestled against the second floor wall that was undetectable from below. The chamber contained funnels, a stool, an alcohol hydrometer, a crate that could contain a five-gallon bottle of liquor and a block and tackle system that could lower the crate to the floor of the garage. Brusky called the police, who searched the premises again. They first believed the secret room to be torture chamber (like the one in the basement of the Four Deuces), but Police Captain Thomas Condon concluded that it was merely an alcohol cache.

By 1935, the building was occupied by Red Ball Movers, Inc., a moving company that also did telephone directory pick-ups and exchanges each year. In 1936, it was purchased by Anaconda Van Lines, which was owned by Samuel J. McArthur. 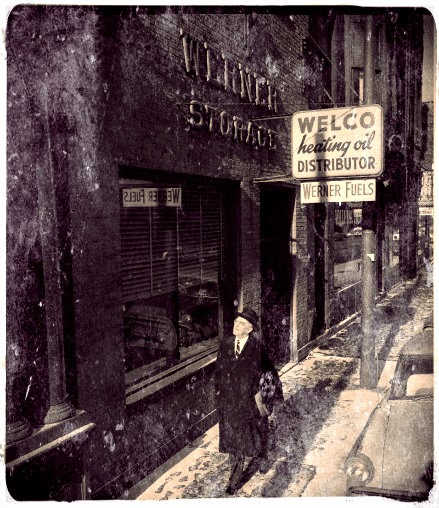 The building at 2122 North Clark Street in 1950, when it was the Werner's Storage Company for antique furniture. They also distributed heating oil.

In 1949, the building was taken over by Charles and Alma Werner, who turned it into a moving, packing, shipping and storage office for antique furniture. At the time, they had no idea of the buildings’ bloody past. They soon found that tourists, curiosity-seekers and crime buffs visited the place much more often than customers, all of them asking to see the infamous wall in back. Depending on her mood, Mrs. Werner either turned them away or allowed them to take a look. She once stated that she wished she and her husband had never bought the building. The Werners were later bought out by the city of Chicago, who wanted the place torn down and replaced with apartments for the elderly. 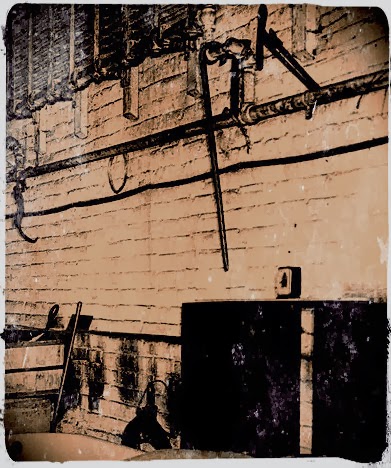 The infamous wall where the massacre took place during the time when the building was owned by the Werners. They were frequently harassed by people wanting to get a look at the bullet-scarred wall.

In 1967, the building was demolished. However, the bricks from the bullet-pocked rear wall were preserved and purchased by a Canadian businessman named George Patey. The bricks were packed and shipped across the border and then put together as the main attraction for a traveling crime show that was displayed at shopping centers, museums and galleries. The show was only a moderate success so, in 1971, Patey opened a Roaring Twenties themed nightclub called the Banjo Palace and rebuilt the wall, for some strange reason, in the men’s restroom. Three nights a week, women were allowed to peek inside at this macabre attraction. To make matters even more bizarre, a sheet of clear acrylic was placed in front of the wall so that patrons could urinate and try and hit targets that were painted on the glass. The club closed down in 1976 and the 417 bricks that made up the back wall were placed in storage until 1997.

Patey began offering the wall for sale, along with a written account of the massacre but had trouble selling the thing in one large piece. Patey, along with a friend named Guy Whitford (who contacted me about the wall in 2002) tried to sell the single piece for some time. The original lot came with a diagram that explained how to restore the wall to its original form. The bricks were even numbered for reassembly. They remained on the market for several years, but there were no buyers. Eventually, Patey broke up the set and began selling them one brick at a time for $1,000 each. Patey died in December 2004 and had sold many bricks by the time he died. The remainder of the wall has since been purchased and rebuilt in a mob museum located in Las Vegas, Nevada. 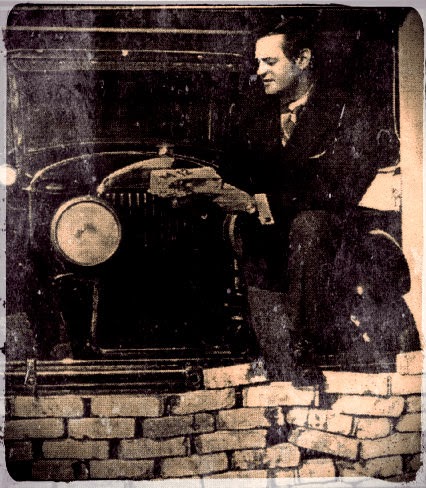 George Patey with the bricks from the massacre wall

The rest of the bricks are in the hands of private owners, who bought them from Patey. Oddly, though, legend has it that Patey actually sold some of the same bricks more than one time. The stories say that some of the bricks were returned to him after they had been sold. It seemed that anyone who bought one was suddenly stricken with bad luck in the form of illness, financial ruin, divorce and even death. According to the stories, the bricks themselves had somehow been infested with the powerful negative energy of the massacre. Many have called this story a “journalistic embellishment,” but there are many who maintain that it’s the truth – and that the lingering energy didn’t effect just the bricks from the blood-spattered wall.

The entire warehouse had been built from brick and many of them were carried from the site by workmen and curiosity-seekers during the demolition of the building. It was said that from these bricks, too, come tales of misfortune and bad luck. Many will vouch for the dire events that plagued them after carrying away one of the “massacre” bricks. Are such stories true? The reader will have to decide what they believe.

Whatever the legend of the bricks, and whether or not they were somehow "haunted" by what happened, there is little doubt that the site on Clark Street was haunted – at least for a while.

For many years, people walking along the street, or who lived nearby, reported hearing the sounds of screams, moans, muffled voices and even the thump-thump-thump of Tommy gun fire. The garage is long gone now, demolished in a misguided attempt by city officials to erase all vestiges of Chicago's gangster past. A portion of the block was taken over by the Chicago Housing Authority and a fenced-in lawn that belongs to a senior citizen development now marks the area where the garage once stood. Five trees are scattered about the area and the one in the center actually marks the point where the rear wall once stood, where Moran's men were lined up and gunned down. The apartment building, where Mrs. Landesman lived and heard the sound of Highball barking in the garage, still stands but all remnants of the S-M-C Cartage Co. have vanished. Or have they?

According to reports, residents of the senior housing complex built on one end of the old lot have had strange encounters in the building, especially those who live on the side that faces the former massacre site. A television reporter from Canada interviewed a woman who once lived in an apartment that overlooked the small park and she often complained that, at night, she would hear strange voices, unusual sounds and knocking on her door and her window. She complained to the management, who dismissed her claims as imagination but assigned her another apartment. A new tenant moved into the rooms and she also complained of odd happenings, including knocking sounds on her door at night. When she opened the door to see who was there, she never found anyone nearby. One night, the tenant even stated that she saw a dark figure that was wearing an old-style hat. He remained in place for a few moments and then faded away. Most of the strange phenomena experienced by the new tenant also faded away and soon eerie events either stopped completely or she got so used to them that they no longer bothered her anymore. 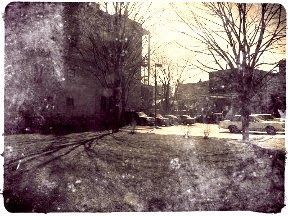 The site of the S-M-C Cartage Co. today -- an empty lot on Clark Street. A few remnants of the site remain on the wall of the building next door, bricks in the back alley and some say, ghosts.

Outside, along Clark Street, passersby and the curious occasionally reported strange sounds, like weeping and moaning, and the indescribable feeling of fear as they walked past the former site of the garage. Skeptics tried to laugh this off, saying that the sounds were nothing more than the overactive imaginations of those who knew what once occurred on the site but based on the reports of those who had no idea of the history of the place, something strange was apparently occurring.

And those who were accompanied by their dogs also reported their share of weirdness, too. The animals seemed to be especially bothered by this piece of lawn, sometimes barking and howling, sometimes whining in fear. Their sense of what happened here many years ago seemed to be much greater than our own. 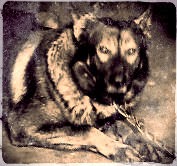 However, many believe that what dogs were sensing was not the human trauma experienced at the massacre site, but rather the trauma that must have been experienced by Johnny May's German Shepherd, Highball. The poor animal must have been terrified by what occurred that morning, from the deafening sounds of the Tommy guns to the bloody slaying of his beloved owner. Tied to the front bumper of the truck, Highball had nowhere to run. It should be noted again that it was not the sound of machine-gun fire that alerted Mrs. Landesman to the horror inside the garage; it was the howling and barking of the terrified dog.

Tragically, Highball was so traumatized by the events of that morning that he had to be put down after the massacre. Chicago Sun reporter Russell V. Hamm, who was one of the first newsmen on the scene, said that the dog was never the same again and his bizarre behavior left the police no choice but to euthanize him.

Could the animals that subsequently passed by this empty lot have sensed the trauma suffered by Highball so many years ago? As any ghost buff can tell you, it's the events of yesterday that create the hauntings of today and sometimes, those who lived in the past can leave a little piece of themselves behind to be experienced in the present over and over again.

While the site of the St. Valentine’s Day Massacre seems to be quiet today, the violent events of the city’s gangster era still reverberate over time. Men like Al Capone, whether city officials want to admit it or not, left an indelible mark on Chicago. It seems that the events of St. Valentine's Day 1929 left one, too.

To be continued tomorrow -- the Haunting of Al Capone