On this night (December 29) in 1972, Eastern Airlines Flight 401, a Lockheed L-1011 aircraft, crashed into the Florida Everglades near Miami International Airport, killing 101 of the 175 people on board -- and has since become one of the most famous aircraft flights in the annals of the supernatural.

Due to malfunctioning lights and displays, the airplane crashed northwest of Miami, almost nineteen miles from the end of runway Nine Left, in the heart of the Everglades, a vast swamp region of water, saw-grass, marshland and alligators. Flight 401 was traveling 227 miles an hour when it hit the ground. The left wingtip hit first, then the left engine and the left landing gear. Together, they slashed three long trails through the heavy saw-grass. Each trail was five feet wide and more than one hundred feet long.

When the main part of the fuselage hit the ground, it continued to move through the grass and water, coming apart as it went. It hit once, lifted into the air and then slammed back down again with a hard, grinding sound. About halfway along its path, the nose of the plane spun clockwise and careened around until it was sliding backwards. As the plane was skidding through the swamp, a fireball rushed through the cabin, from front to rear. Passengers felt a blast of cold air and then a wet wave of fuel as the plane broke apart. The huge white fuselage crumpled and tore into five large sections and countless smaller pieces. From the first impact to the point that it came to a shuddering halt, the plane traveled more than one-third of a mile. 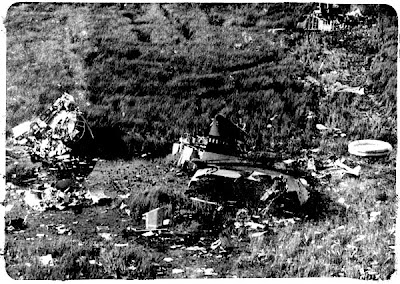 Passengers drowned in the murky water. Others were thrown from the plane, suffering broken bones, paralyzing injuries and death. Rescue workers converged on the scene, saving many lives -- and recovering many more of the dead than the living.

As it happened, the crash of Flight 401 was not the end of the story.

Captain Bob Loft and flight engineer Dan Repo were among the one hundred and three people who lost their lives when Flight 401 crashed. Both of the men would be found to be at fault by the NTSB investigation, although most of the blame fell on Loft’s shoulders. They were accused of being preoccupied with finding a source for an indicator light problem and ignoring the fact that the plane was steadily losing altitude. When they discovered what was wrong it was too late – a fact that apparently haunted both men after their deaths, for their ghosts soon began to be encountered aboard other Eastern L-1011 jets.

Apparently, to save costs, Eastern ordered the salvageable parts of the aircraft to be removed and incorporated into other Eastern planes. Soon after, reports of the ghosts of Repo, Lofts and even some unidentified flight attendants were encountered on various Eastern flights. For the next year or so, they were most often seen on Eastern flights that contained the salvaged parts. Eastern crew members and passengers saw the ghosts or heard them speak on the plane’s intercom systems or received verbal messages and warnings from them. Witnesses also experienced cold sensations and sensed invisible presences, aircraft power turning on by its own volition and a tool inexplicably appearing in a mechanics hand when no one was in the area.

Substantiation of the sightings was difficult, however. Eyewitness reports made to Eastern’s management were met with skepticism and a fear of further damaging the airline’s reputation and causing a further loss of business. The crash had done enough damage and for the public to hear that the ghosts of some of the lost plane’s crew were visiting other flights could make for a public relations disaster. For the most part, eyewitness crew members were told that perhaps seeing a psychiatrist would be in order, which most took as a precursor to being fired. After that, most were reluctant to talk to anyone investigating the hauntings and the sightings that did occur were often covered up. Log sheets that contained the sighting reports, as well as the names of witnesses, mysteriously disappeared from the planes where they occurred. Normally, a logbook would contain entries for several months, but these pages vanished. To this day, many hotly deny the stories of the ghosts from Flight 401, despite the scores of credible witnesses that eventually came forward.

Eventually, once the parts from Flight 401 were removed from the various planes, the hauntings came to an end. Eastern Airlines ceased operations in January 1991, leaving behind a mystery of what actually happened in the planes that were said to have been visited by ghosts.

You can read the whole story of Flight 401 -- and the salvaged parts -- in Troy Taylor's recent book CABINET OF CURIOSITIES, available in Kindle, Nook and print editions at https://www.prairieghosts.com/cabinet.html 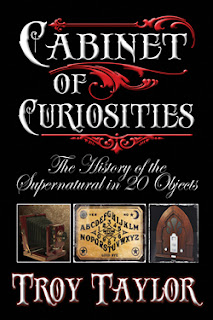 "LIPS THAT TOUCH LIQUOR WILL NEVER TOUCH OURS.."

On this date in 1900, radical prohibitionist Carrie Nation carried out her first public smashing of a bar at the Carey Hotel in Wichita, Kansas. She was, as they say, "on a mission from God."

Carrie (or Carry, both spellings are correct) was a large woman, almost 6 feet tall and weighing 175 pounds, with a stern face and sour demeanor. She described herself as "a bulldog running along at the feet of Jesus, barking at what He doesn't like," and claimed a divine ordination to promote the temperance movement by destroying bars. Originally married to a raging alcoholic in 1865 (he died just four years later), she became violently opposed to liquor. She remarried in 1874 and while running a successful hotel, received her divine calling in a dream. Following "orders from God," she broke out the windows of a saloon in Kiowa, Kansas and when a tornado hit the area a short time later, she saw it as divine approval of her actions.

Carrie continued her destructive ways in Kansas, her fame spreading through her growing arrest record. After she led a raid in Wichita her husband joked that she should use a hatchet next time for maximum damage. Carrie replied, "That is the most sensible thing you have said since I married you." The couple divorced in 1901, not having had any children.

Alone or accompanied by hymn-singing women she would march into a bar, and sing and pray while smashing bar fixtures and stock with a hatchet. Between 1900 and 1910 she was arrested some 30 times for "hatchetations," as she came to call them. She paid her jail fines with lecture-tour fees and sales of souvenir hatchets. 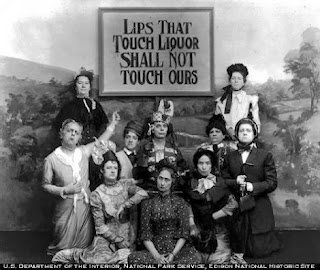 Carrie's anti-alcohol activities became widely known, with the slogan "All Nations Welcome But Carrie" becoming a bar-room staple. She continued to sell souvenir hatchets, as well as photographs of herself and a copies of her newsletter. The press followed her activities, both good and bad. Suspicious that President William McKinley was a secret drinker, Nation applauded his 1901 assassination because drinkers "got what they deserved."

Near the end of her life Carrie moved to Eureka Springs, Arkansas, where she founded the home known as Hatchet Hall. Her health failing, she collapsed during a speech in a Eureka Springs park. She was taken to a "nervous and mental trouble" hospital in Leavenworth, Kansas and died there on June 9, 1911. Carrie was buried in an unmarked grave in Belton City Cemetery in Belton, Missouri. The Woman's Christian Temperance Union later erected a stone inscribed "Faithful to the Cause of Prohibition, She Hath Done What She Could" and the name "Carry A. Nation".

If Carrie had lived just nine years longer, she would have seen Prohibition become the law of the land -- and when criminal empires were built because of it, she might have realized the folly of her radical beliefs. Or perhaps not...

BASED ON A TRUE STORY... 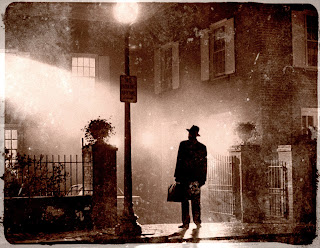 On this date in 1973, THE EXORCIST -- a film that has spawned generations of nightmares -- opened around the country in theaters. Rumors soon spread of people fainting, vomiting in the aisles and of ambulances rushing people to the hospital. Whatever the truth, the film created a wave of interest in the occult in America.

As most of our discerning readers know, the film (and original book) was actually based on the true story of an exorcism that took place in St. Louis in 1949. Author Troy Taylor previously released THE DEVIL CAME TO ST. LOUIS in 2006, but a NEW, updated and revised edition of the book will be released in January 2014!
Posted by Unknown at 9:24 AM No comments: