THE MAN IN THE GREEN PAJAMAS

LAST SEEN AT THE SANDMAN MOTEL....

One of the most disturbing unsolved disappearances of the last half century occurred in the town of Jacksonville, Illinois in 1959 when a man named Bruce Nelson Campbell stumbled out of his hotel room one night, dressed only in a pair of green pajamas, and was never seen again. What happened to the New England stockbroker has never been determined – he simply vanished without a trace.

In April 1959, Bruce Campbell, age fifty-seven, and his wife, Mabelita, drove to Illinois from Northampton, Massachusetts. The reason for their visit was meant to be a happy one. They had traveled to see their newly born first grandson, son of Bruce, Jr., who was an assistant professor of chemistry at MacMurray College, in Jacksonville.

For some reason, the long drive to Illinois was especially hard on Campbell and he began feeling sick while he was in the car. The stock investment counselor became confused and disoriented and when they arrived in Jacksonville, Mrs. Campbell checked them into the Sandman Motel, a small, family-owned establishment that was typical of motor lodges of the day. It was located on the northwest side of town, on Walnut Street, where a Casey's store now stands. Each room had a door that opened to the outside and parking was located right outside the guest’s room. Campbell was put immediately into bed after they checked into the motel. Bruce, Jr. arranged for a doctor to visit his parents and Campbell was treated for two days before he started to show some improvement. 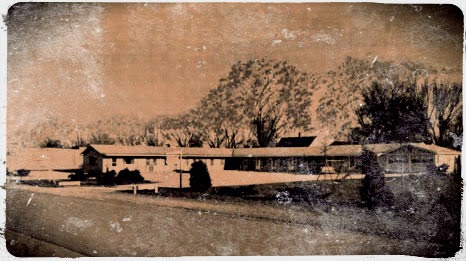 The Sandman Motel in Jacksonville in 1959

On the evening of April 14, Campbell visited with his family and Bruce, Jr. later recalled that his father was “rational but still disoriented” during his last visit with him. Twice, later on that night, Mrs. Campbell said her husband asked her if their station wagon, which was parked outside of their room in the motel’s parking lot, was locked up. She told him that it was, shortly before going to sleep.

She later woke up at 2:15 a.m. and saw that the other double bed in the room was empty – her husband was gone. She immediately got out of bed to look for him and when she realized that he was not in the bathroom, hurried to the door of the room, which was unlatched. There was no sign of him in the parking lot and the desk clerk on duty said that he had not seen anyone walking past the office. The Campbells’ car was still sitting in the lot. The doors were locked and it was undisturbed.

Because of her husband’s weakness and disorientation, Mrs. Campbell quickly called the police. When officers arrived at the motel, she offered a description of the tall, balding man with a slight limp and explained that when he left the motel room he was wearing only a pair of bright green pajamas, a wrist watch and a ring with the Delta Upsilon fraternity crest on it. His wallet containing all his money, his shoes, his eyeglasses  and his car keys were still in the motel room.

Police officers searched the surrounding area, the darkened streets and the Jacksonville downtown area, but there was no sign of Campbell. The next morning, a request was put out for information and theories of murder, suicide and amnesia led searchers to local creeks, farm buildings and wells. No body was ever found.

The search for Bruce Nelson Campbell, the man in the green pajamas, continued for days and weeks and then it stretched into years. His family refused to give up hope that he would be found alive until 1967, when he was finally declared legally dead.

What became of Campbell? No one knows. He simply walked away into the darkness of a quiet Illinois town and was never heard from again.

The story of "The Man in the Green Pajamas" will be featured in a longer version in the upcoming book, HAUNTED JACKSONVILLE by Troy Taylor & Lisa Taylor-Horton -- coming in fall 2014!
Posted by Troy Taylor at 9:29 AM